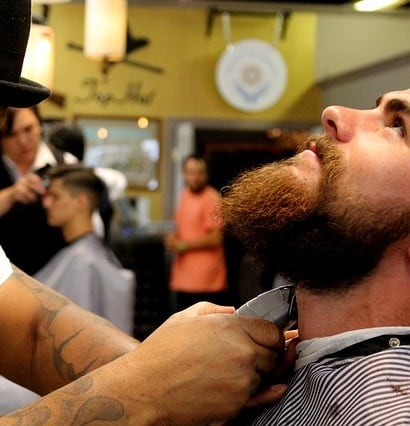 Facial hair is a popular trend these days, which is prompting the question from many candidates on whether or not they can have a beard or other facial hair.

So, can firefighters have beards? Generally, no, you will not be allowed to have a beard and will most likely be required to be clean shaven all times while on duty.  There’s a variety of reasons for this, but there have also been some exceptions and even some legal battles.

It is common to see many young men sporting beards of all different lengths and styles. Many professions allow for this as long as the beard is well-groomed and hygienic. But, some are a little stricter.

Many bearded men want to become firefighters but worry that they need to shave every day. Is this really the case?

Can firefighters have beards under any circumstances?

In this article we’ll look at some of the policies in place, the reasons for them and cases where bearded firefighters have fought for their rights.

So, can firefighter have beards, or not?

First of all, it is important to note that the rules and regulations vary depending on location and the attitudes of the local department.

Some will maintain a fairly strict policy where firefighters should remain beard-free when on duty.

There is no problem in letting it grow while off duty, but they need to shave before returning to the station.

Others are a little more relaxed and will allow for short, well-kept beards within reason.

There are even some stations (albeit not very many) are a lot more lenient and don’t really care as long as crews can carry out their job effectively.

The enforcement of regulations often depends on the role of the firefighter. Those that perform line or combat duties – in other words, direct action in fires and major incidents – are more likely to be told to shave.

Those that work in other departments or within community firefighting groups are more likely to get away with some beard growth.  Also, it’s important to note that many front office personnel may be allowed to have more facial hair as they won’t be fighting any fires.

Why beards aren’t usually allowed in the fire service

The following is a quote from a fire academy rule.

it states that all those using masks “must be clean-shaven” It goes on to say that anyone with a medical condition “which precludes their ability to be clean-shaven” must tell their supervisor.

They will then be advised on other shaving techniques. This means that if you’re a rookie, you can almost certainly forget about growing that beard.

This no-beard policy from the National Firefighters Association all comes down to an issue of health and safety.

As a firefighter you’ll need to wear a SCBA mask to protect yourself from the smoke and other substances in the air.

That mask forms create a seal on the face to stop air coming in and to provide a clean flow of oxygen.

The fear is that a beard can cause a barrier between the mask and face, limiting the ability to create a good seal.

This gap, however small, could mean that dust particles get into the beard and the airways of the firefighter.

If dust and soot were to get into the beard, this would increase the risk of developing serious respiratory illnesses and cancers.

Cancer rates are high among firefighters because of the layers of debris on their gear. Plastic particles, petroleum fumes, asbestos and more all play their part.

If this sits within the beard it is all too easy to inhale particles after removing the mask. Any firefighter with a beard will need to wash it carefully after every incident to stay clean.

If they don’t, those particles and carcinogens could contaminate the fire engine and station throughout the day.

Therefore, the safest approach is to keep beard hair to a minimum to avoid this risk or to shave it all off.

Why are so many firefighters upset about this policy?

Firefighters that work in stricter precincts aren’t always happy about this rule.

While some see the health benefits and urge others to stay clean-shaven, others want to exercise their right to facial hair.

Some stations will allow a short amount of well-groomed facial hair where it doesn’t have an impact on the seal on the mask. This could be a good compromise for those that don’t want to be completely shaven.

However, there is another issue to consider when it comes to the rights of firefighters to grow beards.

Some firefighters will do so for religious reasons.

Therefore, it goes against the rights of these workers to practice their faith to ask them to shave.

Some firefighters have even taken departments to court to protect their rights.

One of the most interesting cases about the right to grow facial hair when working in the fire department occurred between 2001 and 2007 in Washington, D.C.

A group of Muslim firefighters sued for discrimination over the department’s grooming policy in 2001.

In 2005 the department changed the rule to create a safety policy against beards. The grounds here followed the same idea above – that those with beards couldn’t create a seal on their masks.

In 2007, the court ruled under the 1993 Religious Freedom Restoration Act against the department due to a lack of evidence over these claims.

However, just two years previous, a Philadelphia courthouse ruled in favor of their local fire department.

They stated that the Muslim claimant was not allowed his beard while on duty.

In other words, he would have to go against his faith to continue with his duties in the service.

The Council on American-Islamic Relations (CAIR) has fought against the Occupational Safety and Health Administration (OSHA) for decades on this issue.

They insist that no Muslim should have to shave their beard because of safety concerns.

In 1998, OSHA stated that they “recognize that if such a situation should arise, there are respiratory protection alternatives”. These alternatives refer to loose hoods and helmets.

Therefore, there are measures already in place to accommodate beards if needed.

In 2016, firefighters in Jacksonville, Florida, were sent home and assigned desk work because of their beards.

Officials stated that the beards were a safety risk and the men had to shave them off. Previously, 30 firefighters had been given a waiver to keep the beard because they were prone to razor bumps.

State rules in Florida state that those using respirators need to be clean-shaven.

Those that suffer from razor bumps argue that the mask will rub against them and cause more issues. They may bleed over masks, which makes the gear unhygienic, and the bumps could get infected.

The problem is worse for African American firefighters and there are fears that actions like this highlighted deeper levels of inequality.

The history of firefighters and facial hair

You may have noticed that, so far, we have only discussed the rules on beard hair.

Few departments will expect their firefighters to be completely clean-shaven. The shape of the mask means that mustaches and sideburns are not much of an issue.

Firefighters have long been able to grow these instead of a full beard.

Mustaches were even a tradition among firefighters, perhaps a sign of masculinity in this tough profession.

An archived story from 1986 in the New York Times discusses this trend in the FDNY – 40% of personnel were estimated to have moustaches.

It also highlights the end of beards in the service as a result of the introduction of oxygen masks.

These masks did also place restrictions on the type of moustache that the men could grow. It couldn’t be too long or unkempt.

The general rule at the time was that the moustache could not extend beyond the corners of the mouth or below the upper lip.

There are also questions over whether this policy has any basis on stereotypes over professionalism.

One of the reasons that firefighters had to cover their tattoos was that there were worries over their professional image. This has been contested by many in the service that insist that the way they look doesn’t affect their skills or professionalism on the job.

The same is true for those with facial hair.

Some suggest an underlying, old-fashioned prejudice against people that look a certain way.

Should professional men in authority roles be free from tattoos and facial hair?

So, if I want to be a firefighter can I have a beard?

The answer here isn’t a straight forward yes or no one. Some people will be able to go into community roles and other departments and get away with a well-groomed beard.

Others that go on the front line will be forced to shave theirs for safety reasons.

However, OSHA has previously stated that alternative options do exist.

The best course of action for anyone looking to become a firefighter is to check policies with local departments. Is your beard acceptable in their eyes?

If so, make a note of that acceptance in case there are issues down the line.

If not, consider whether or not you are happy to shave it off for duty. If you can’t do so, for medical or religious reasons, explain your circumstances.