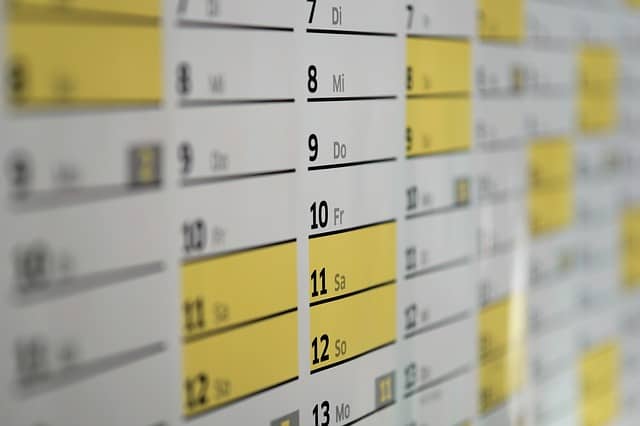 It’s not uncommon for future firefighters ask questions about how many hours firefighters work? There are several different firefighter shift schedules so I’ll do my best to explain them.

So, how many hours do firefighters actually work?

Almost all fire departments operate a 24-hour rotation.  This means firefighters are almost always working 24 hours at a time.  Depending on the department they may schedule their crews in various ways including the traditional 24 hours on, 48 hours off. This is commonly referred to as working “24-48.”

There is the preconception about firefighters that they are always on call and that the job is nothing like a typical 9-5. This is fair because no firefighter is clocking-out at 5 pm to join other commuters and head home.

However, most civilians don’t actually appreciate the amount of structure that goes into the different firefighter shift schedules at a department.

Every crew has specific times when they are on-duty and off-duty. This schedule can vary depending on the state and local policies. There are also strict rules on time off, overtime and more.

Thus, if you’re hoping to join the service make sure you know what you are signing up for.

In this article, I want to go into further detail about the different schedules that exist in the fire service.

How many hours do firefighters work?

How long is the average shift and how many hours do firefighters typically work per week?

Finally, I want to talk about what happens if there is a major incident while a firefighter is off-duty.

The more that you understand about the structure of the schedule, the better prepared you will be if you become a firefighter.

Fire stations are incredibly busy places that require a lot of man-hours.

Every full-time fire station in the US should have personnel on-duty at all times – 24 hours a day, 7 days a week and on all major holidays.

The simple reason for this is that there has to be a crew ready to respond to an incident at a moment’s notice. If there is a major car accident in the area, a house fire or an industrial emergency, crews must be available ASAP.

This means that there are different options available when it comes to shift patterns.

How many hours do firefighters work at the fire station?

It is difficult to define a typical shift or the most recommended approach because opinions vary.

Some stations like to use 24-hour shifts where one crew stays at the station for the whole day. Others prefer to delegate 12-hour shifts instead. City Managers and fire chiefs will still debate which is the best option because of the effect on their staffing, response times and their budgets.

On the plus side, a 24-hour shift means that the same crew members can handle checks, duties, operations and paperwork through the day.

There is no risk of messages being lost in translation during the changeover.

There is plenty of time to write all the reports, carry out tasks and find time to train and study at the station.

There is also the fact that some incidents can take a long time to get under control. A large fire requires care, patience and many hours of work.

No crew wants to rush a job to be back at the station for the next shift change.

Stations that regularly deal with major incidents with lots of equipment may prefer the 24-hour approach.

However, 24-hour periods can be emotionally and physically draining.

A firefighter may not be as sharp and have the same reaction times on hour 22 as hour 5.

One way departments combat this is to include “sleep time” into the 24-hour schedule. The shift officers let firefighters take up to 8 hours out of this working period as long as they provide appropriate sleeping arrangements at the station.

Crew members need to be aware that if they work for any of those hours instead, they must be paid for that work at their regular hourly rate.

Also, the 24-hour shift schedule means that crew members have to work every third or fourth day.

I will talk more about the days off in between shifts below. This strict policy means that many crew members face having to work all Sunday or all the way through major religious holidays.

This is one of the sacrifices that are a part of the job.

An alternative option for some fire departments are the 12-hour shift.

Another shift example sees firefighters working 12-hour shifts for 4 days and taking 4 days off duty. This results in roughly the same number of working hours per week, with more frequent breaks between shifts and a long time off-duty.

Some stations like this approach because they can adjust the number of crew members on duty for each 12-hour block.

Peak periods when the majority of the city is awake require more hands on deck. There are more risks of accidents and fires between 8 am and 8 pm.

These shorter shifts can also minimize that risk that firefighter will develop fatigue while on-duty and compromise their work.

Regardless of whether it’s 12 or 24 hour shifts all fire departments will have a particular schedule pattern that they prefer and will refer to it by ratio.

What Is The California Swing Shift?

Originally developed by the large departments in California, the California swing shift is a slightly different take on the 24-hour schedule.  This means firefighters will be on duty for 24 hours at a time, every other day, for 5 days.  After the 5 day ‘tour’ is complete they will be off for 96 hours (4 days).  Then the schedule repeats.

Another, less common but similar, schedule pattern is the 48/96.  Firefighters are on duty for 48 hours then off for 4 days.

How much time off do firefighters get?

The working week of a firefighter can depend on different circumstances of their employment contract with the city/district.

Typically, those that work 24-hour shifts do so for anywhere between 48-52 hours per week.

This can be great for firefighters that want to spend more time with their families or work on side projects.

In addition to the unpaid sleep breaks mentioned above, there is also an FLSA ruling where firefighters can take an unpaid, uninterrupted meal break.

If staff work through this break they are entitled to their pay.

What is a Kelly Day?

Kelly Days are mandatory days off within a firefighter’s schedule.

The frequency of these days can depend on the policy of the station or the type of schedule members are on.

This could mean one Kelly Day per week or once every 10 days.

It’s also important to note that if you are a volunteer or reserve firefighter you will probably not be eligible for Kelly Days.

Another interesting variant here is that some are paid, and others are unpaid.

Firefighters on a salary often receive paid Kelly Days and those on hourly rates don’t.

The strange name comes from the former mayor of Chicago, Edward J. Kelly, who implemented the idea for firefighters in the city in 1936.

Overtime in the fire service.

These Kelly Days play an important role in firefighter shift schedules because not only do they offer an extra break for firefighters, they also help with overtime regulations.

Federal law on firefighter employment states that firefighters can work for 53 hours a week before they are entitled to overtime pay.

Regular Kelly Days limit the number of times that this can mathematically occur across the year.

Therefore, it is a great way for the department to save money.

Overtime payments are an issue in the fire service because some departments struggle to budget for them.

One recent example is the Los Angeles County Fire Department. They saw an increase of 36% with over 640 members gaining $100,000 in payments in 2017. This is significantly more than the LA police or medical staff.

As a result, the LA department faced accusations of struggling to manage its budget or schedule staff effectively.

Stand-by time as a firefighter.

Some may argue that firefighters are always on duty and always working.

Some crew members can be on call in case they are needed for an incident. Being available for active duty and working a shift are not the same thing.

If firefighters are on call and don’t do anything that could be regarded as a duty, they aren’t entitled to pay.

If they do help out with other duties while on call, they can receive compensation through overtime pay.

Now that you know this you may be asking how many hours do firefighter work on average with all this in mind?

There really is no strict average as each department will be slightly different. All of these points about the schedules, working hours, days off and pay conditions can vary between different departments.

In the end, those in charge of the department need to create employment policies that are effective for all firefighters.

This means providing the right amount of coverage and manning at the right times. It also means considering the best interests of personnel.

Departments can alter the ratio of staff on 12 or 24-hour shifts in their station, the downtime between and other aspects of the firefighter shift schedule.

Finally, I want to make it clear to recruits that they need to understand their contract. Talk to firefighters, chiefs and city managers about the conditions of the schedule and expectations over the number of hours worked.

Understand what you are signing up for regarding time off, Kelly Days, overtime pay and other factors.

At the same time, make sure that stations don’t take advantage and you are paid for your time.

The different firefighter shift schedules have their pros and cons. They can be tough and long when on-duty, but they also create plenty of time with loved ones when off-duty.

Do firefighters sleep at night?

Yes, depending on how busy your station is you may sleep through the night. However, don’t be surprised if you are awake multiple times during the evening.

Do firefighters get vacation days?

Yes, in addition to scheduled time off and Kelly Days, firefighters also earn vacation days and sick time. How much vacation time depends on the department policies.