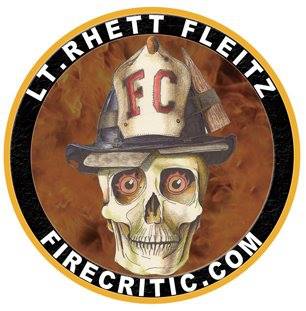 Chances are you have either read the fire critic blog, heard him speak or seen one of his social media profiles. If you haven’t, let me introduce you to Lieutenant Rhett Fleitz of the Roanoke Fire Department in Roanoke, Virginia. He is also well known by his alias as “The Fire Critic.”

As one of the more outspoken figures in the fire service, and 16 plus years of experience, I thought it would be good to get Lt. Fleitz’s straightforward advice for any aspiring firefighter. I had the privilege to speak with him and ask him 4 pointed questions, here’s what he had to say…

What do you think is the most important trait an aspiring firefighter must possess?

Determination. Getting a job as a firefighter is not the easiest of tasks. Even the best candidates can be skipped over. You have to be determined to keep on applying at departments. When I was applying, I had a file cabinet full of information on City departments in a 5 State area. I wanted to work in an urban environment, didn’t want to move too far away from where I was living at the time, and I wanted to open my opportunities up as wide as I could. In the end, I was hired in a department about 3 hours from where I had been living. It was around the sixth process I had gone through. I didn’t know anything about the area, but I am glad I was offered and accepted the job.

Word of advice? Measure your successes and failures in applying and testing for jobs against yourself. You have to continually better yourself. You cannot control who tests against you, the testing process, or who they hire…you can only control how you perform. Continue studying, learning, reading about the process. Take your experiences in testing and interviewing to polish your delivery.

Best advice I received as a candidate/rookie? Probably to keep your mouth shut and listen unless you are asking a question. That doesn’t mean I followed it, but there is a lot of truth in that statement. There’s a popular quote I think from Plato: Wise men speak because they have something to say; Fools because they have to say something.

How do I define success as a fireman? Great question. Let’s talk about the actual work. Success in fighting fires. I would define success as a good stop on a difficult fire, making the right choices when you don’t have time to analyze risk, learning from mistakes (failures) and not letting it happen again…some call that experience. Success in our line of work often comes in the form of being able to make someone’s day not quite as bad as it may have been. It can be measured in laughter back at the firehouse, a pat on the back, or simply a silent nod after a bad call. In our line of work, congratulations are hard to come by. It is up to us to learn and be proud of when we have succeeded in the face of adversity.

I’ve said it before, and I’ll say it again, learn from those who are where you want to be. Take the advice of Lt. Fleitz, determination through the hiring process will be one of your biggest allies. It is a long difficult road to becoming a career firefighter, but you must stay determined!

The best place to find out more about Lt. Fleitz and his take on all things fire would be www.firecritic.com.